Constantine, the last king of Greece and Commodore of Honour of the Tornado class since 1976 died on January 10, 2023. He was a close friend of our class, supporting it for 32 years while in the Olympic games. Paul Elvstrom was his coach, during the 1960 Olympic games, when he, Odysseus Eskitzoglou and Giorgos Zaimis won the gold medal in the Dragon class 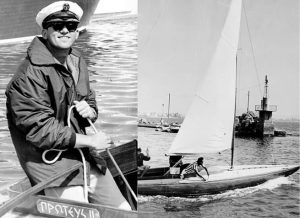 Report by World Sailing:
Constantine, the last king of Greece, was a lifelong and dedicated sailor and his service to World Sailing spanned more than 60 years.

He first became involved with the federation in 1960, the same year he won Olympic gold in the Dragon class at the Olympic Games in Rome, at just 20 years of age.

This gold medal was of huge significance for Greece as it was the first for the country since 1912 in any sport and the only medal for the Greek team at those Games.

The former His Majesty first took a seat on a World Sailing Committee in 1961 when he joined the Class Policy and Organisation Committee (CPOC) and the new Catamaran Technical Committee.

In 1964, the year he acceded to the throne of Greece, His Majesty was appointed as Vice-President of Honour at World Sailing, a position which engaged him directly with the Council and Executive Committee. In 1994 he became President of Honour, a role he held until his passing.

King Constantine became president of the Hellenic Olympic Committee in 1957 demonstrating his strong commitment to the Olympic Movement, and in 1963 he was elected as a member of the International Olympic Committee where he was actively involved in all aspects of the movement. He was elected an Honorary Member for life in 1974.

In 2010, King Constantine was awarded the Beppe Croce Trophy by World Sailing in honour of his outstanding voluntary contributions to the sport of sailing.

He is survived by his wife, the former Princess Anne-Marie of Denmark, three sons, two daughters and nine grandchildren.

Our thoughts are with his family at this time, and we join the rest of the sailing world in mourning his passing while also celebrating his contribution to the sport.