Last weekend, the Raiffeisen €uro Cup 2020 took place at Rohrspitz/Lake Constance, which was originally planned for Whitsun and internationally advertised.
This regatta was the Austrian Championship and Vorarlberg Championship for Tornado.
14 Tornados from 4 nations were registered, 12 Tornados were at the start.
The weather forecast predicted nice weather and little wind and that was the way it should be.
All hopes were on Saturday and that we could bring the necessary 3 races together.
Punctually at 10:00 a.m. the signal from our race director Ivo Gonzenbach sounded to leave the shore.
At 11:30 the orange flag was set up and with a light breeze from NW, the first race started at 11:45.
Afterward, the wind fell asleep and the long waiting began. We managed to start the second race of the day at 17:50.
Great end of day 1 in the See restaurant Rohrspitz.
The sunny Sunday was announced as windless and how pleasant after a south wind a relatively constant west wind set in, which made 4 more races possible.
Winners of the open championship: SUI 228, Martin and Paul Rusterholz in front of SUI 225, Marcel and Ben Steiner followed by CZE 62 Pavlis Zdenek and Klara Pavlisova.
Austrian State Champion becomes AUT 3, Dietmar and Silvia Salzmann in first place, with AUT 31, Nicole Lackner and Manuel Salzmann in second and AUT 49, Jens Blum and Fritz Ruppert in third place.
It was a great weekend with action and fun!

We thank all participants, helpers, and especially our main sponsor Raiffeisen Bank for this event and look forward to next year. 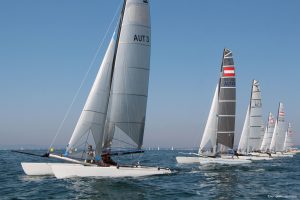 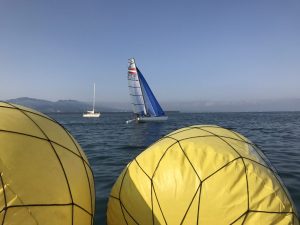