Trigonis has won multiple world and european titles as a crew, sailing together with Dany Paschalidis, and this is his first one as a helm. Kazantzis is a young promising sailor who landed powerfully on the Tornado after the end of the 49er Europeans. 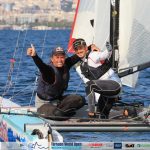 Michaela Pavlisova, 21 y.o. & Marek Pavlis, 14 y.o. from CZE are the new Mixed and Youth champions, standing also in the 2nd overall! This sister & brother team had already won the 2021 Europeans some months ago. Michaela has switched to the helm’s position after sailing 10 years as a crew and together with her brother put some pressure on the first ones. 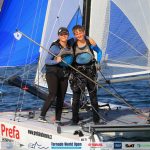 In 3rd position overall is the Hellenic Police team of Nikolaos Mavros and Periklis Aidinidis, who had a powerful start at the beginning of the championship standing first on the first day of the event and managing to stay top and on the podium, despite the very light wind conditions that followed. Note that they are already this year’s 2nd European champions!

Top 2 places of the Mixed category where a family business. After Michaela and Marek, their father Zdenek and their other sister Klara stand on the second place! Zdenek is one of the most experienced Tornado sailors, sailing for the Czech Republic, who managed not only to have won multiple champions but also to get his kids into sailing with the same passion!

Stratos Kosmoglou and Maria Vogiatzopoulou are a new built crew who managed to win the third mixed Tornado champions using Stratos experience on the catamaran and Maria’s hard work! 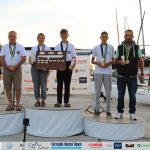 This was the first world championship after the COVID restrictions. It finished successfully with all sailors looking forward to the next one. We missed our overseas friends and the ones that couldn’t make, we have many new young sailors entering the class and wish to meet again all together safely next year at La Grande Motte, FRA. Dates are to be announced next week.