Latest News
You are here: Home / Events / European Championships / The titles are decided

Congratulations to Zdnek Pavlis and daughter Klara Pavlisova, who won the overall as well as mixed European Championship title with an incredibly sovereign performance. Zdnek Pavlis is a long-time Tornado sailor who brings a lot of experience and knowledge. Daughter Michaela Pavlisova and son Marek Pavlis were able to benefit from this experience. The European Champions of 2021 managed again this year to win the Youth European Championship title and to reach the second place in the overall as well as mixed classification. In total, they managed to win 3 out of 7 races. 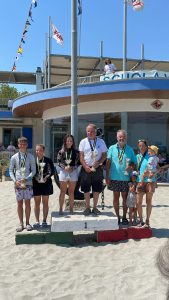 On the 3rd place of the podium are also Mirco Mazzini with crew Andrea Ciavatta, who delivered a very consistent performance throughout the regatta days. Especially in stronger winds, the team was able to show its strengths.

Dietmar Salzmann, also a long-time and very experienced helmsman, was able to sail to 3rd place in the mixed ranking with his daughter despite a broken line in the 4th race.

The Tornado class would like to thank the sailing club Congrega Velisti Cesenatico and all helpers for an unforgettable and perfectly organized European Championship 2022.