The Story of the Tornado, the Olympic Catamaran

The Tornado was designed in the autumn of 1967 by Rodney March from England, with help from Terry Pierce, and Reg White, specifically for the purpose of being the new Olympic Catamaran, which was to be selected by the IYRU in an Olympic Catamaran Trials. The boat was developed mainly in Brightlingsea, England.

International Status was granted to the Tornado as a result of its outright winning of the IYRU Trials held in England. The next step, adding the Catamaran event to the Olympic program, occurred two years later, with the result that the first Catamaran event, sailed in 1976 in Canada, was sailed in the Tornado. The Tornado is an outstanding example of a class that was designed specifically for Olympic competition that has become a successful International class on its own merits.

The Tornado has since remained unchallenged as the ultimate one-design catamaran. With its modern, stylish rigging and sleek lines the Tornado is quick to catch the eye of any water-drawn on-looker as it speeds across harbors, lakes, and oceans in over 30 countries around the world. With its ability to reach speeds of 15-18 knots upwind and downwind, and 33+ knots reaching, the Tornado is truly the purists’ speed machine.

Over 4,800 Tornados have been built, with 1,200 class association members worldwide. In 2004, on the Saronikos Gulf in Greece, the Tornado will be sailing in its seventh Olympic Games.

Except for refinements in technical details – improvements in hull, sail, and spar technology, better blocks and lines – the Tornado was unchanged from its beginnings in to the early 90’s. Then, as a result of the increasing popularity of other, smaller catamarans, the Tornado class undertook a major development program in 1993. It was specifically to respond to a request from the IYRU to search for ways to improve the public and media awareness of the sport of yachting, and secondarily to answer the possible challengers to its ‘top cat’ role.

Two weeks of intensive on-the-water testing and development took place in Miami, following considerable discussion and planning. Among the participants were the three medalists from Barcelona as well as designer Reg White. The International Tornado Association spent nearly US$22,000 on the testing, evaluation, reporting, and finally balloting process to the class membership, to find the fairest and best ways to improve the class and the sport in ways acceptable to the sailors.

The testing involved 10 standard and fully competitive Tornados, one boat with a larger main and jib, and two boats with a variety of sailplans that included spinnakers of up to 32 sq. m. Fourteen races were run over the testing period in addition to in-line speed and handling evaluations.

As part of the testing process, new courses were also used, most involving a leeward gate.

Following the testing and regatta, the following points were clear; the larger main/jib combination was only marginally faster than the standard rig, and the spinnaker boats were a surprise, only beating the standard rigs in 2 of the 14 races. The ITA then balloted the class membership, with not only the conclusions but also all of the data and the testing procedure, helping to provide insights to the rig selection process.

A two-thirds majority is required by the class constitution to implement any change; this majority was not reached, the class voting against the expense of a change with no real benefit to sailing. Thus the class retained the same sailplan for the next two Olympics. The course changes, giving the possiblity of better spectator access and greater media coverage, received the votes necessary to be adopted by the class.

The Class felt then that the changes in course, rather than changes in the equipment, would have a greater impact on public awareness and media coverage. Courses are adjustable in length for wind, thus giving a fixed racing time for the event, and the shorter-than-before course also tend to keep the boats closer, making the racing more exciting and more easily viewed. The fixed Start/Finish lines also is a help, allowing faster turn-around times between races. The new course formats have been in use in the World Championship beginning in ’93, and have proven popular with both the sailors and committees, and are continued today.

The issue of changes in the boat were revisited in 1999, when the ISAF decided to have a Multihull Evaluation Trials in France to look at “possible replacements” in the Olympic program for the Tornado. At the time, there were a number of technical changes in materials that allowed for better spinnakers, and better control, and there were then a number of successful double-trapeze plus spinnaker catamarans on the market in the Tornado size range – 20 feet – that were becoming popular.

The Trials were interesting. Except for the custom, all-carbon Marstrom 20, the standard Tornado dominated upwind, beating all production challengers from Hobie, Nacra, Mystere, and others. Only by piling on sail area, plus a spinnaker, were any of the challengers able to beat the Tornado around the race course, and even then the advantage disappeared as the wind increased. But the extra athleticism needed to sail with a double trapeze, and the extra visual interest provided by the spinnakers, was undeniable, and the final outcome was that the ISAF decreed that the equipment for the 2004 Olympics would be the “Tornado with double trapeze and spinnaker”, and left it up to the class how to implement the changes.

The class took an approach that allowed some development and testing, with the goal of keeping crew weight in the same range as with the old rig. The final result, approved by the class in early 2001, were both evolutionary and radical. First was a new mainsail with a flat top and more area, providing more heeling moment to compensate for the double instead of single trapeze and help keep crew weights with the same range. Second, done to clear the trampoline to make spinnaker work possible, was to redesign the jib. The new jib had the same area, but was longer on the luff and shorter on the foot to allow it to be sheeted to the main beam. Interestingly, this change, moving the sail area forward, overcame one of the Tornado’s handicaps, tacking, and made this maneuver much easier. The innovation of a self-tacking jib appeared later in 2001, and was quickly adopted by the entire fleet. Finally, of course, there was the spinnaker, and the class set only size limits, allowing the question of spinnaker handling equipment to be settled on the race course. Again, the advantages of spinnaker launching tubes quickly established themselves, and became a class standard. Interestingly, the two biggest boathandling improvements, the self-tacking jib and the spinnaker tubes, were quickly adopted by the classes below the Tornado, especially the International Formula 18, which was becoming the Tornado trainer for future Olympians.

The one-design (as opposed to one-manufacturer) Class Rules have allowed the Tornado Class to insure close racing from sailing like-designs, but with the ability to alter the shape of the sails within the approved sailplan to control power. This has allowed teams to be competitive regardless of weight combination or stature, an important feature of the Tornado that has survived the years and the change to the new rig.

The problem often associated with one-manufacturer classes, where in addition to the boats the sails are also strictly controlled, is that a standard weight/height combination dominates. With the ability to alter the sail shape within the Tornado sailplan has resulted in a class where minimum crew weight is not necessary; in the final results in a Tornado event, it is common to have teams whose total weight varies by 40 kg to appear in the top 10.

Another advantage of the one-design concept with multiple manufactures is the freedom to allow competitors to build such things as rudders and boards, and to do their own rigging. This insures increased strength and extended competitive life of components as modern materials become available at lower cost. An example of this; from a one-manufacturer class rudder replacement can become costly if the materials chosen by the manufacturer years ago cannot be upgraded. Over the years, the Tornado class rules have changed to allow for material improvements in many of the details, especially sails, to take advantage of improvements.

Rigging also has high replacement cost. If a manufacturer chooses lower-grade materials to keep the “new purchase price” low in order to be competitive in the retail market place, it is the active competitor who pays extra by having to constantly replace the lower-grade components. A fine example of this is the traveler on modern catamarans; on the Tornado, modern technology has lead to a dramatic decrease in replacement costs, as parts can be mixed from a variety of sources.

Pieces of the absolut first wooden Tornado ever build back in 1967 K 1 ( later KA1) by Reg White are now in Australia owned by John Forbes, who had the chance to buy the mostly damaged hulls some years ago(2020). 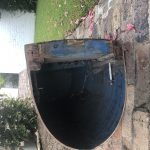 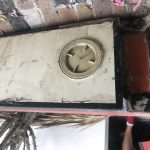 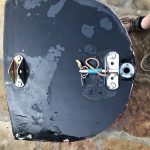 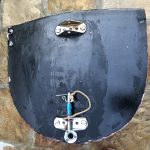 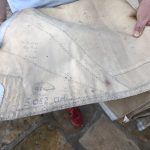 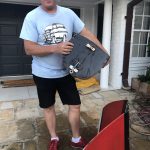 The natural technological evolution of materials, plus the push for the sailors for stronger boats at the same weights, has allowed the Tornado Class to increase its competitive life dramatically since the late ‘80’s. While having a reputation as fragile and short-lived back in the 70’s, the modern Tornados have racing lives of 7-10 years. Many of the world’s Tornado sailors, who actively race in other catamarans, know well that the modern production boats have top-level racing lives of 1-3 years.

One of the major causes for the low resale value of the one-manufacturer boats is that they are often supplied at major events. This saves the competitor no money, since they have to have the boats to qualify to get to the top events. These supplied boats, which are then sold cheaply by the manufacturer after the event, actually hurt the most active racers by lowering the resale values of their won boats.

The rules of the Tornado class have also resulted in sails that have long racing lives, the result of the competition among sailmakers for quality and durability. One-manufacturer sails, on the other hand, are mass produced at the cheapest price that the manufacturer is willing to gamble with, from materials that are not the quality of open classes. The result again is that the racing competitor pays more, buying more sails to stay on top.

The Tornado Class Rules have evolved and been developed over many years and now ensure strict attention to all details relating to the performance of the boat. Rules are modified as needed and wanted by the sailors themselves, to allow the Tornado to advance with modern technology yet always considering the long-term effectiveness of the changes.

The Olympic status of the Tornado has brought some of the finest sailors from all over the world to the class. With over 22 nations regularly attending the annual World and Continental championships, and with the medals won at the Olympics going to sailors from all the continents where the boat is active, the Tornado has a world-wide level of racing matched only by a very small handfull of other classes.

The Class Rules allow the boats to progress with technology and let modern materials such as carbon fiber, nomex, epoxy resins, and high-grade aluminum to be used as they fall in price and can be incorporated into the boat, resulting in constantly improving quality. This helps resale values and enables the Tornado to maintain its marque as the ultimate speed machine; to this day, closing in on 40 years after it birth, the Tornado is still the fastest one-design production boat in the world.

For the immediate future, the class is concerned with ways to bring in more modern, lighter materials while maintaining the one-design nature of the boat, and done in such a way that the purchase price of a new boat can be contained.

This article originally by John Forbes of Australia, 5-time World Champion and Bronze (92) and Silver (00) medallist, with updates by Jim Young, one of the major coaches in the class since 1981.