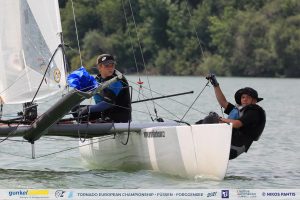 The European Tornado Championship, which was hosted by the Füssen Forggensee Sailing Club for the first time in the club’s 65-year history, came to an end on the 25th of July. A total of 17 teams from 6 nations competed at the first major after-COVID breakout event.

The organizers received high praise from all participants and especially from the chairman of the German Tornado Class Association (DTKV) Markus Betz for the excellent hospitality and professional organization on land and water. “This was one of the best European Class Championships in recent years,” Markus Betz said.

The championship began with very weak wind conditions around six knots, plus lots of driftwood from the river Lech. Only on the last day did a constant north wind with 9 knots finally appear, so that two races could be sailed again. After a total of 5 races out of the 8 planned, the Tornado European Champions 2021 were decided.

The Czech team Pavlisova/Pavlis was the youngest and also a mixed team, they secured the European Championship titles in all three categories (Open, Mixed, and Youth). The lightest team by far, 21-year-old Michaela Pavlisova together with her 14-year-old brother Marek, both from the yacht club Kovarov, mastered the difficult light wind conditions on Lake Forggensee in the best possible way. With three first places and a third place in the fifth race, nothing stood in the way of their overall victory with six points. The Greek ex-European champions from the Nautical Club of Thessaloniki, Nikolaos Mavros and Periklis Aidinidis succeeded in gaining 2nd place, after winning a redress request. 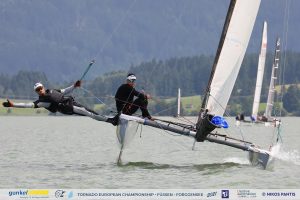 After her win, Michaela Pavlisova mentioned: “Dear friends, I would like to thank all the people who were part of the event. It was a pleasure to see you and sail with you again, especially after the covid break last year. I didn’t expect such wonderful results, especially when we competed against such experienced sailors, but it makes me incredibly happy. Looking forward to seeing you in Thessaloniki or other future competitions.“ 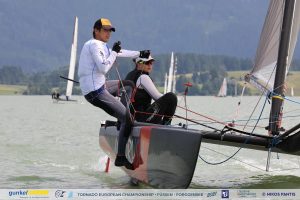 The international jury, led by Carlos Gracia Motta, Barcelona, had only one protest on Saturday after the last two races.

The next big international regatta of the Tornado class, which is also the highlight of the season, is the World Championship hosted by the Nautical Club Thessaloniki, Greece, from 26 September to 3rd October.

The Tornado catamaran continues to enjoy unbroken international popularity with mixed teams, a total of eight teams competed at the European Championship. From the point of view of the international Tornado class, it is pleasing to see, according to ITA President Jürgen Jentsch, that especially the young teams coming from the 29er and 49er Skiff are now getting on better and better with the former Olympic Tornado (1972-2008).

The 20-year-old Swiss helmswoman Tamara Baumann, a very experienced skiff sailor from the Zürich Yacht Club, said after her first participation in the European Championships that the Tornado is interesting for her with today’s technology, especially as a boat for women and for mixed teams. The cat is easy and safe to handle. The 25-square-meter spinnakers are also cut much flatter nowadays than in the past and the approximately 16-square-meter mainsails can be easily controlled even in strong winds with the mainsheet systems of 12:1.

Due to its longevity, a Tornado is also increasingly sought after as a second-hand boat. The price for this with a carbon mast is currently between eight and twelve thousand euros. A new boat from the Australian Windrush boat builder in Perth is around 25,000 euros plus sails. 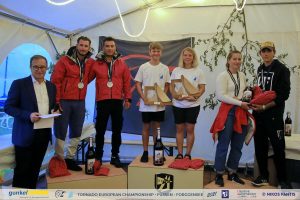