Latest News
You are here: Home / News / Final Day of the 2022 World Championship

The World Championships in La Grande Motte have been decided. Unfortunately, only one race could be sailed on the last final day due to light winds. This race took place around 6 knots of wind, which is the minimum limit to be able to sail a race in the Tornado class.

Congratulations to the new world champions. In the Open class the World Champion title goes to Greece. Konstantinos Trigonis and Konstantions Kazantzis won dominantly with only 10 points. 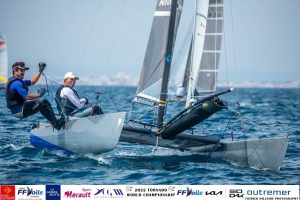 The French team with Yoann Trecul and Thomas Ferrand could not close the gap to 1st place on the last race and finishes the World Championship on 2nd place.

On place 3 is Brett Burvill and Kirsikka Raisanen who also won the title in the mixed classification. Unfortunately they had to miss one race due to a damage on their boat. 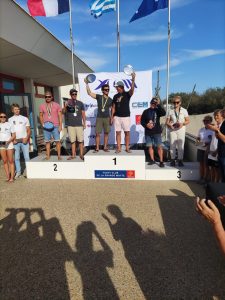 The team from Austria with Angelika Kohlendorfer and Calvin Klaus could win the Youth World Champion title by a very constant performance. At the same time they finished the series in second place in the Mixed classification, followed by the reigning Youth European Champions from the Czech Republic with Michaela Pavlisova and Marek Pavlis with a gap of only 4 points. They finished the World Championships in La Grande Motte in 3rd place in both the Mixed and Youth rankings. 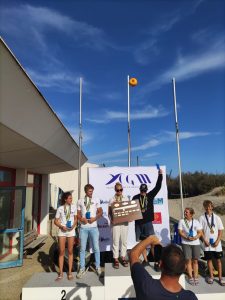 The Tornado class would like to thank the organizers, race committee, jury and all sponsors for an unforgettable and perfectly organized World Championship 2022 in La Grande Motte.