Czech as well as German sailors took part in the International Tornado Championship of the Czech Republic that took place 13-15 September.

Thanks to warm and windy weather the whole championship was very successful. All 12 scheduled races took place in three days. Race officers built the race course only for the Tornado class, so boats raced in a fast flow with back to back races. 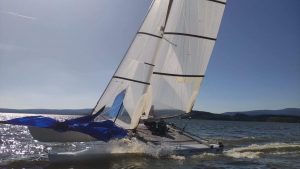 The wind was unexpectedly stable and slightly weaker at the Lipno locality, that suited lighter crews. Races lasted 30-40 minutes, with three laps and interesting moments at the start, turning buoys and on the finish line.

Competitors enjoyed the event. During the evening sitting of the Tornado family individual phases of the races were long discussed.

Best of all participants were CZE 62, Zdeněk Pavliš /Marek Pavliš from YC Kovářov.
Marek is only twelve years old and together with his father created a well-functioning team especially for the conditions that prevailed at Lipno this weekend. they won all but one race so they justly won the Czech Republic sailing title in the Tornado class.

The second place went to mixed crew form YC Kovarov / ALT TOR, CZE 72, Michaela Pavlisova /Krystof Velisek. This crew was the only one who managed to beat the first ones after a good start and the second place in the overall ranking. Their result was based on good starts and the experience of the helmsman Michaela from her participation and wins at international races.

Third place went to the experienced crew of the same club, YC Kovářov, CZE 50, Milan Chlebna / Jiří Pavliš. This crew, prefer harsh conditions with stronger wind and was the biggest rival in the
fight for medal.

Twelve-year-old Marek was not the youngest participant. It was Štěpán Beneš only 10 year-old boy who sailed on boat CZE 6 together with his father Peter created another family crew. Even though they were on an old boat with a duralumin mast they could have gained a better ranking if luck was on their side (turned over on one start and damaged the sail)
After noting the youngest participant, it is worth noting the oldest participant too. It was 81 year-old Bruno Barth from Germany! Bruno sailed all the races with his granddaughter Melanie showing that the Tornado can be sailed despite any age limit.

David Křížek / Zdeněk Adam had an enormous sporting bad luck with the ambition for the overall victory. While preparing their boat for the race, Zdeněk injured his leg unpleasantly and although they tried it on the water, he could not enter the race with this injury.

We were also sad when we were informed that less than a week ago, at the open German championship held on Lake Garda, many crews that were about to participate in the championship suffered considerable damage to their boats due to strong wind on the last day of this event and had to renounce their participation.

Coming event: 21.-22.9.2019 in the Jestřábí camp in Černá v Pošumaví the Cup race Tornádo.
Many participants have already entered and all sailors are invited.

There will be a lot of action to watch and in case someone is interested, he can try a catamaran ride.

On behalf of ALT Tornado written by: Zdeněk Pavliš

The login page will open in a new tab. can i buy viagra over the counter in malaysia After logging in you can close it and return to this page.