It will take two shocking races by series leaders Brett Burvill and Max Puttman (AUS) for them to lose the 2019 Tornado World Championship title, which they have dominated to date, winning five of the eight races completed. Their worst drop is a DSQ from race four after a port/starboard incident in Race 4.

Second overall is the Swiss team of Jorg Steiner and Michael Gloor who have had a relatively consistent regatta, with their worst drop being a 16th in Race 1. 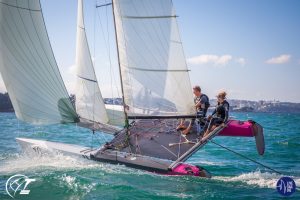 16 year old German Tornado sensation Estela Jentsch and her Australian crew Daniel Brown are currently third overall after an up and down regatta. Their worst drop is a DNF in Race 4 after their mainsail tore in half at the upper batten. However a less than perfect Race 8 is forcing them to work even harder to retain their position on the podium.
Race 7
An unfortunate incident (not involving any other competitors) during the starting sequence forced Julian Tankard and Simon Cook (NZL) to withdraw from the regatta. Damage was sustained to their boat and as of leaving the boat park for the night, their regatta was over. The incident will be handed over to relevant insurance companies, so details of what happened will not be published at this time.

“We are devastated because we were going so well,” said a disappointed Tankard. “We were finally coming together as a team and up until this happened, we were running fourth overall, so yeah, just really gutted about the whole thing.”

After hours of delay due to an inconsistent breeze, Race 7 finally got away at 1530 hours, 2.5 hours after the scheduled time. The fleet saw 6-10 knots from the north with the sea breeze filling in, yet it was still as shifty as ever.

Burvill and Puttman (AUS) were deep at the start but managed to claw their way back to the pointy end of the fleet by playing the constant shifts up each of the three upwind legs.

German team Marcus Betz and Nicholias Betz were looking famous, however when they crossed the line they were advised their result would be scored UFD as they were over at the start under the U flag.

Wayne Limbrick and Lewis Kidman from Tauranga in New Zealand had their best result of the regatta finishing third in Race 7. 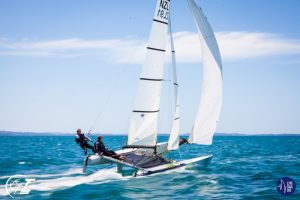 “It was awesome!” said Wayne, with a grin from ear to ear when back on shore. “We finally had it all come together and we are pretty happy with the result.”

Race 7 Results
1st – Brett Burvill & Max Puttman (AUS)
2nd – Estela Jentsch & Daniel Brown (GER)
3rd – Wayne Limbrick & Lewis Kidman (NZL)
Race 8
The breeze finally started to play ball and the fleet saw 10-13 knots from the north. After a general recall the fleet was again started under the U flag, this time with everyone playing it safe on the start line.

With the breeze more consistent there were only a few shifts to take advantage of, and once again it was the Australian duo of Burvill and Puttman who let their dominance be known to the fleet.

Steiner and Gloor (SUI) were hot on their transoms, pushing the Aussies at every chance they got.