Those that managed to out shift the shifts were the winners on the day for Races 5 and 6 of the 2019 Tornado World Championships Powered by Candida Stationery. Racing on the waters offshore from Takapuna Beach, the south-westerly caused some frustration amongst the fleet, with the results being blown wide open on Day 3 of offical racing. 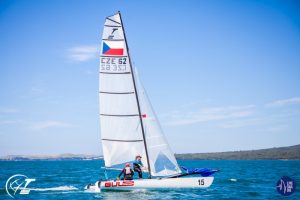 Jetsch and Brown celebrated with a high five, pleased with their result.

“We just stayed focused on the job at hand,” said Estela.

This was a great results for the young sailors, who were forced to retire from race 4 after tearing their mainsail.

Dave Lineman and Karl Taylor (NZL) pulled off their best result of the championship to date, finishing second.

The conditions increased slightly to 10-13 knots from the south-west but continued to flick and oscillate throughout the race.

After having a shocker of a Day 2, with a DNF and OSC, Rex Sellars (NZL), sailing with his son Brett, were back on form and took the gun for the second race of the day.

Brett Burvill and Max Puttman (AUS), who were disqualified in race 4 thanks to a port/starboard incident, showed they are still in the game, pulling off a second in race 6, after having an eighth in race 5. These results now put them back on top of the overall leaderboard.

But the players of the day were Jetsch and Brown (GER), who finished third, propelling them into third overall after six races.

The fleet will now take a well deserved break with the lay day planned for Tuesday 8 January. Most of the sailors are heading to Brick Bay Winery for lunch and Kiwi hospitality, while others will be back to the rigging lawn to make vital repairs to their catamarans before the final two days of racing. Four more races on the cards before the champions will be crowned.

To help make things easier to swallow, we asked more than 5, Aussies for feedback on the pharmacies physical, not online they visited in the last six months. cialis tadalafil Those which met the minimum required sample size of 30 responses are featured in our results below.