The 2019 Tornado World Championships Powered by Candida Stationery kicked off in frustrating conditions in the race area better know as Race Course C of the 36th America’s Cup. The 23 boats racing launched from Takapuna Beach and made their way out to the start line in a light 3-5 knot northerly.

Race 1 was scheduled to start at 1300 hours, however with the fleet struggling to make it out on time, and the oscillating breeze preventing a course from being laid, the AP was flown to signal the start of a long wait.

Race Officer Megan Kensington attempted to get the first race away, however with the 6 knot consistent lower limit, she was forced to blow up two attempted starts before finally getting the fleet away at approximately 1500 hours. 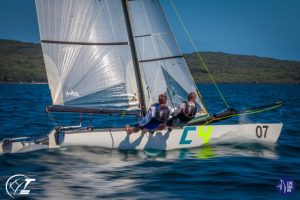 The majority of the race saw 6 knots from the north, however with just one and half legs to go, the westerly came in, completely changing the dynamics of the race. Brett Burvill and Matt Puttman from Australia fought their way around the course, and eventually came out on top to take the first win of the championships.

Race 2 saw more consistancy with the breeze and after a quick course change, the fleet was on their way in an 8-10 knot south westerly.

Burvill and Pittman were at the pointy end of the fleet again this time hustling with Jorg Steiner and Michael Gloor from Switerland. But the Aussies were too strong, and backed up their Race 1 win with a second gun for the day. Sellars and son were third again.

Did you hire out a designer to create your theme. cialis online Exceptional work.