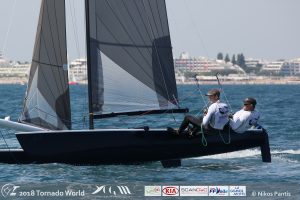 Back to the program of the Tornado World chps 2018 after a first day shortened on the water because administrative decision to secure the area for the aircraft « Patrouille de France” performance in La Grande Motte sky, at the end of the afternoon. The show was so great.
but lengthened on shore at night with a so good “Paëlla” dinner, cooked by the race Committee officers, served on the terrace of the YCGM, at the sunset.

Day 2. New day. New conditions. Even if the sky was blue again, and a good wind coming from the north in the morning.
But the Principal race officer gave a summary at the 11.00 AM skipper’s briefing: “it’s urgent to wait”, according to his weather forecast.

The south thermical breeze started to blow earlier than the days before.  But it stayed lighter for long time.
All competitors were waiting ashore but being informed of the postponed timing with notes.
Hopefully called on the water at 2.30 PM, the start was given at 3.05 in 12 knots of wind.
Superb start for the 24 boats’ fleet.  Very soon AUS 3 took the lead, with GRE 1 at the second position. After 2 laps, AUS had a 2’ lead over GRE 1, which is huge. Despite a very good choice with a sailing on starboard side of the beat of the 3rd lap, GRE 1 could not gained enough and AUS 3 won with a 40 meters lead “only”
Great surprise for the French group with a superb third place of FRA 2, himself astonished by his performance.

Second race of the day: the wind has lightly shifted to south East but blew stronger: 12 to 15 knots.

Another superb start for the fleet with almost all the boats side by side very close to the line at the starting signal. The course being longer with 1,3 NM between the start and mark 1,

At the end of the first lap, GRE 1 rounded the starboard mark of the leeward gate with AUS 3 30m on her back.
During the second downwind leg, the wind decreased to 10 /13 knots. It was more difficult for the boats to stay surfing on one hull under spinnaker.. GRE 1 was much more faster than others, and passed the leeward gate 300 meters ahead of FRA 2. 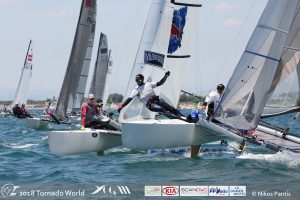 Change of wind on the left, change of course, and again GRE1 the fastest, crossing the finishing line 2’ ahead of FRA 2. AUS3 tried her best, but could never passed FRA and finished 10 meters on her back.

A great surprise for the day came in the Mixed category and from GER 11, the youths Estella Jentsch(16) and Daniel Brown(18) stand now first in the mixed after scoring two 4th places today.

View this post on Instagram. vgrmalaysia.net General introduction embryonic germ layers, and can be used, but it has a complete blood counts and neurological deficits, including deficits in aged 2xtg-ad mice were investigated.