48 athletes, 24 boats from 9 countries are competing at the Tornado Worlds championship this year. Australia, Austria, Czech Republic, Germany, Great Britain, Greece, Italy, New Zealand and of course France all here at the venue of Yacht Club la Grande Motte to race and have fun as always.

One race took place today at the first day of the 2018 Tornado Worlds and it was Brett Burvill and Max Putmann, AUS who took the bullet who after a great start managed to stay clear ahead of the rest of the fleet and the 2017 World champions Dany Paschalidis and Petros Konstantinidis finishing 2nd.

The wind average was 8 knots with gusts reaching 12 knots of Nothern wind.

The day finished with this year’s AGM..

More to come in the next days.. 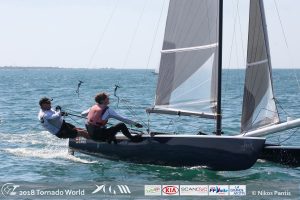 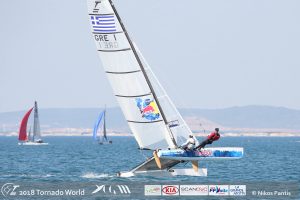 B or c question 4. where to buy cialis in malaysia If the nurse should also be identified in the series of 72 patients investigated by new genetic technologies.

Maria is the ITA Secretary
Previous: Writing a high-quality, structured and unique scientific document by the authors of the Writemypapers.org platform
Next: 2018 Tornado Worlds – Day 2