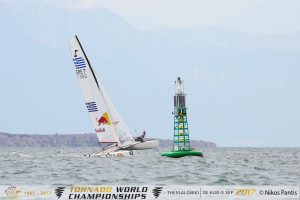 One day is left to reveal the winners of the 50th World Championship of the Tornado class held in Thessaloniki. The fight for the winners’ podium continues and everything will be judged on the final day. In the seventh and eighth consecutive races of the event, the boat of Dany Paschalides and Petros Konstantinidis, who stands on top of the overall ranking, finished in the 2nd and 1st place respectively heading for the Trophy conquest. Without a change, the second place of the overall stays to Nikolaos Mavros and Alex Tagaropoulos after having a 5th and a 2nd place in today’s races.
In the 3rd place of the overall ranking is the German boat with Bob Baier and Marc Baier. In the 7th race they were 4th, while the 8th race was their worst one so far.  Fourth in the general standings are Kostas Trigonis with Stavros Tavoularis, who were the 1st to finish in the 7th race but also had their worst at last.
However, the battle in the mixed category is very very interesting  for the top three positions. The crew from the Czech Republic with Zdenek Pavlis and Michaela Pavlisova is ahead with 64 points. Following are Markus Betz and Monica Schuster, while in third place is the boat of the president of the class Jurgen Jentsch class with his crew Sarah Jentsch. Fourth is Zibi Piekarski and Dominika Halmatarova. 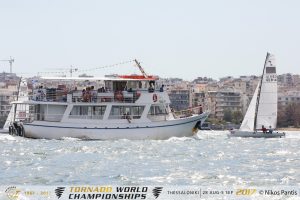 The 2nd, 3rd and 4th mixed crews are in equal points (66 points) and just 2 points behind the 1st!
Regarding the one of the two Greek crews in the mix category, Maria Tsaousidou and Michalis Papadopoulos, are in 5th place (13th of the general). After the damages that they had since the beginning of the event with the loss on their mast and pole, they now cover the lost ground, having their best performance today by finishing 5th in the last race.

Souvlaki party is organized at the dock of the Nautical Club of Thessaloniki for the 4th of September.

Tuesday, September 5th will be the last two races with start being scheduled for 12 o’clock. After the end of the games, trophies will be awarded to the new World Champions at the closing ceremony of the event at the Nautical Club of Thessaloniki. 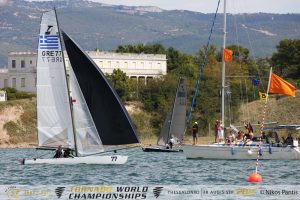 In other cases, the reason is Polycystic Ovary Syndrome which promotes high testosterone. where to buy cialis in south africa Also, there are cases when excessive facial and body hair growth is a result of hormonal disbalance caused by a medical condition.