The multiple world champion Iordanis Paschalides and his 18 y.o. crew Petros Konstantinidis from Greece are coming closer to the title of the world champion as after all races of the 2017 world championship they are stable at top of the overall ranking with just 5 points, scoring five first places and one 4th on the six races made so far. 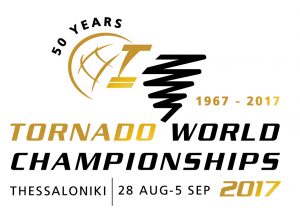 Steady in the 2nd place of the overall classification with 10 points remains the twin and ex European champs Nikolaos Mavros – Alexandros Tagaropoulos who was 3rd on the first Saturday race and 1st in the second.

In 3rd place overall is the German boat with Bob Baier – Marc Baier having a great date today..

Kostas Trigonis and Stavros Tavoularis made their best appearance so far in this world championship and moved to the 4th position of the general ranking after finishing in 2nd and 3rd place in the last two races and are now also claiming a place on the podium of the winners.

Do they have enough time?

Higher or below Dany and Petros??

Jürgen and Sarah Jentsch are the leaders in the Mixed division. But Zibi Piekarski – Dominika Haltmarova are close behind with just 2 points difference, standing in 2nd. Zdenek Pavlis-Michaela Pavlisova and Markus Betz – Monika Schuster stand in 3rd and 4th place respectively having equal points and ONLY 2 points difference from the 2nd ones!!

What a fight for the MIXED division!

A delicious official Gala Dinner took place at “Karabourno” restaurant after Saturday’s races, while Sunday, the rest day, was ideal for the sailors to visit the “Gerovasiliou” vinery for some wine tasting and history learning before tasting some of the greek delicacies and relaxing by the sea to “Kima beach bar”.