Tornado Worlds – Thessaloniki/ Greece – Day 2
1st September: After two Friday’s races Dani Paschalides and Petros Konstantinidis are still stable on the first position in general classification having four consecutive firsts, with the duo Nikolaos Mavros/ Alexandros Tagaropoulos who also follows steadily in the 2nd place of the general ranking. Germans Bob Baier/ Marc Baier moved up to the 3rd place.
The second day of races began with one hour delay due to light wind. During the races the conditions were excellent with the wind starting at 10 knots and reaching up to 16. The Greek team, that has been leading so far, summaries two first days of the world championships:
Petros Konstantinidis: “Our start with four firsts is very good. We have put the bar high and we will try to achieve our goal. But nothing is predestined. The 1st position is open also for other crews. This experience is very important for me because thanks to Dani’s choice I’ve got a piece of great sailing knowledge that seems to me very useful in the future”

To the question whether in the future imagines himself in such a good place as Dani he answers: “The truth is that we all make dreams, but in the country we live in is not easy to achieve them”
Dani Paschalidis adds: “Picking Peter was a very good crew choice. Peter is young in age but has experience and reads the wind very well. He can see the wind changes and has helped me a lot and it’s like sailing with Kostas Trigonis. Peter reads wind, tells me about the changes and makes right choices during the race.”

Regarding the rivalry during this regatta so far Dani points out: “This world championships has more competitors than it was in previous one, as there are 4-5 boats that go very fast. That means that you can easily make a mistake, lose a lot and find yourself far from the first fifth. We now understand what is happening in the race so we have to be very careful what we do. There have been four races and there are six more so it is too early to talk about the final results.” 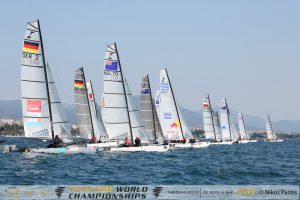 Races for tomorrow are scheduled to begin at 3 pm.