31th August: After the “Day 0” while the practice race and the opening ceremony were held, Thursday early afternoon Tornado World Championships have started. 23 teams from 10 countries will compete for the world title till 5th of September.
The first day of the championships started with a skippers’ meeting at 10.30 am. The first race was planned for 1 pm, but the Race Committee decided to wait for the wind to come. The competitors left the club to the racing area about 2.30 and after 3 pm the first race began. Two races scheduled for today were run according to the plan in ideal sailing condition with wind 8-15 knots.
Both races were won by Greek team Iordanis Paschalidis/ Petros Konstaninidis and they lead the overall standings. Nikolaos Mavros/ Alexandros Tagaropoulos in each race came second, so they are second in general classification. As a third in first race Aussies Brett Burvill/ Max Puttman crossed the finish line and in second race – Germans Bob Baier/ Marc Baier. In general classifications team Burvill/ Putman are on the third position and Baier/ Baier on the forth.

Among mix teams the Czech team Zdenek Pavlis/ Maichaela Pavlisova are leading.
During this worlds the current world champions Iordanis Paschalidis and Konstantinos Trigonis are sailing in different teams.
“We decided with Danny not to sail this year’s Tornado World championships together giving the opportunity to two young talented sailors to get the experience of racing with us and get more “deep” into catamaran racing. Such a great feeling and great responsibility for us to pass our knowledge to young generation! – Kostas Trigonis explains. “It seems that our Red Bull Under My wing program works! Danny and Petros are leading after the first day and our team is on the fifth position! We’re still improving our sailing together in new teams, so everything can happen… 🙂 ”
After racing all sailors were invited to the hosting club – The Nautical Club of Thessaloniki, for “Sardine party by Danny and Kostas”.
Tomorrow two races are scheduled for the afternoon.
Results after 2 races: 2017 Worlds Results – Day 1 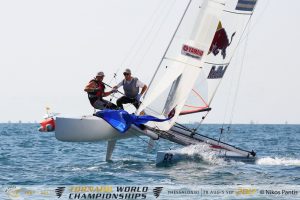