Postponement was on at the begging of Day 2 at lake Lipno but the breeze increased soon so all the boats were on water before 2 p.m..

The wind was shifty again today and ranged from 7 to 12 knots offering three amazing races to the sailors.

Dany Paschalidis and Kostas Trigonis are still on on the first place having scored two second places and a bullet.

The conditions were difficult to handle and it was a great day for Roland and Nahid Gaebler from Germany who scored 2 bullets and a second place. For now they are on the second place overall, just 2 points behind the first and are followed by Nikolaos Mavros and Alex Tagaropoulos.

In the Mixed crews Roland and Nahid Gaebler are clearly in front, Zdenek Pavlis and Michaela Pavlisova from Czech Republic are in the second place and the president of the class Juergen Jentsch with Sarah Jentsch are on the third. 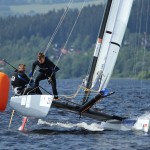 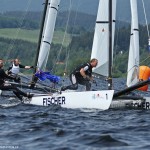 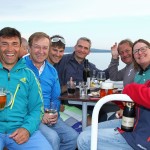 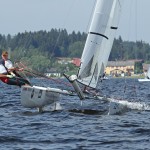