Only one race was completed on the 3rd day of the 2015 Tornado Europeans, as thunderstorms were about to come in lake Lipno.

Wind varied from 6 till 12 knots during the race and the shifts were dominant once more.

The German crew of Roland and Nahid Gaebler finished first and are now leading the fleet having equal points with Dany Paschalidis and Kostas Trigonis from Greece. Second crew of the race today was the Hellenic Police team of Nikolaos Mavros and Alex Tagaropoulos who are now standing on the third place overall.

David Krizek and Adam Zdenek managed to finish 3rd on the only race of the day and are now the 4th crew overall.

In the Mixed category, Roland and Nahid Gaebler have a clear lead with the Czech team of Zdenek Pavlis – Michaela Pavlisova and Maurer Dieter – Oldenburg Katrin following them in the second and third place respectively.

A trip to Cesky Krumlov and some good food, after the race, made this day perfect despite the rain that tried to mess things up!

So German and Greeks are having equal points on the first two places. Some exciting races are expected for the last day of the championship. 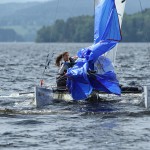 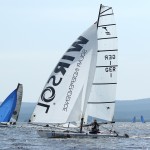 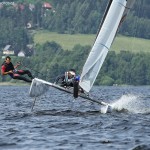 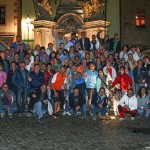