Redbull team take the lead on the penultimate day.

With four races scheduled for Friday it was always going to be a big day, especially with the points being so tight at the top.

Again there was lots of cloud cover to start the day but this cleared over the lunch break to a windy afternoon with clear skies. 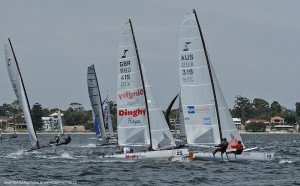 The first start of the day was a little frustrating with the sailors fighting to be first over the line, this resulted in two general recalls from race officer JT who has been doing a great job. The U flag then made an appearance with the sailors holding back for the third attempt. After some wind changes across the river some sailors were gaining but were then quickly left behind. The local sailors from Nedlands YC were in their element. In the end it was Team Redbull who took the victory followed by Gavin Colby and then Brett Burvill.

In the second race the start was also close with plenty of discussion at the pin end. The left hand side of the course seemed to pay best but with varied wind it was hard to judge. Sailors could be 100m apart but sailing different courses, this was a exciting downwind with fast sailing and crossing of boats.

In breezier conditions the sailors headed out to the start area after lunch for the final races of the day. The wind kept building throughout the race with an average of 22 knots throughout the race. There was plenty of drama with Roland Gaebler having his port rudder knocked off before the start, James Clark stopping for a swim in front of the downwind gate and plenty more capsizes across the race course. 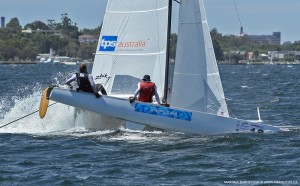 After the third race the race officer decided enough was enough and postponed the fourth race until tomorrow.

Scoring a 1,3,1 today the table has changed and Iordanis Paschalis and Kostas Trigonis lead the fleet going into the final races. If they can hold on then this will be their fourth World Championships in a row. 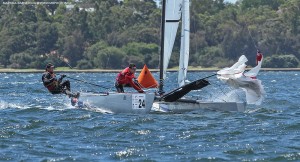 Tomorrow is the final day of the 2014 ISAF Tornado Worlds and Global Mixed Championships with two races scheduled for the morning.