The weather during the week leading up look a little sketchy but the day 1 breeze delivered a beautiful if not a little shifty 8 – 14 kt East wind. The Easterly wind blows off shore on the Owen Anchorage south of Fremantle and as with most of the Western Australian coast line becomes a little shifty but with great flat water.

The 8 Tornado’s all were quite reasonably prepared coming to the end of our sailing season and with many updating equipment or repainting boats prior to the World titles later this year the scene was set for a competitive regatta . 12 races were scheduled with 3 back to back over morning and afternoon sessions on the 2 days.

To the start line and with 8 boats and although Bill Smith the PRO kept the line short there was always going to be enough space for everyone to get away reasonably clear and it was a great exercise in timing to hit the line in clear air with everyone up and running close to the gun on most occasions. Most races saw the fleet arriving close together at mark 1 after a full upwind. Gavin Colby , current Hobie 16 world champion , was back on a Tornado for his first regatta in many years and after a just a month of training with Pete Dubbelaar in his fully prepped and re painted boat ( ex Tom Phipps) with a new set of sails had good speed and was the best at picking the breeze. He was often able to come from behind after a 1 lap of the 2 lap 20 minute races to win 5 of the first 6 races. Another relatively new team of James Clark and Ben Taylor took it to Gavin for most of race 5 and race 6 leading for much of the 2 races and finishing with a second and a fourth ending the day well after a few issues in the morning saw them miss two races. The racing was very tight with as many as 6 of the 8 teams leading at some point. The afternoon races were held in a little less breeze bringing the boats even closer together on speed but spreading them out again with pressure differences down wind especially. 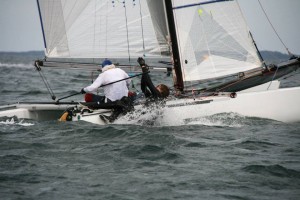 Paul Raymond sailing with Damien Mcalinden were consistent and Paul Peterson and Jared Eyles a little up and down but showing great speed at times. Ron Stokes and Nelson Clark have made great gains this season and their races were great often battling it out with Gavin Davies and Will Elks for the entire race up and down through the fleet but often together. Lachie Gibson and Josh Fugill back together and racing well for a few race wins with great pace when the wind was higher and a good hit out for the boat which hasn’t sailed much over the last 5 years or so and is the process of a re fit. Brett Burvill and Ryan Duffield sailed together for the first time in 14 months and were a bit rusty sailing borrowed boat but ending up with a few victories and a puzzling speed problem up wind with inconsistent speed and heading form one tack to another. Monday afternoon the problem revealed itself when the mast was lowered and the 45mm side bend evident, oops. It looks like the diamond wires need replacing with a possible slipping swage. It is worth everyone checking this as most masts are now 6 or more years old.

Day 2 winds were quite fresh and the wind from the east north east meant a lumpy sea and challenging conditions. As the day went on a few retirements meant that the last race was not started when all bar Paul and Jared headed for shore as places were decided and racing had gotten uncomfortable . The down wind speeds were amazing with a solid swell running almost square to the Stbd gybe angle but nicely across on the port offering amazing rides. Big thanks to the JBSC and their on water team for getting us away on time and allowing all 12 races to be sailed ( although we all piked on the last one)