The wind started from the West with lots of cloud cover, this was due to disappear later in the day with the wind increasing. 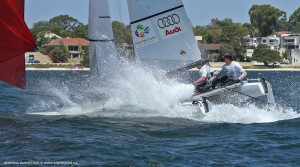 The first race of the morning was sailed in varied conditions starting with around 8 knots, dying in the middle and then finishing in around 15 knots for the back of the fleet. With the varied conditions it was a game of chance for the sailors with multiple course direction changes. The husband and wife duo of Roland and Nahid Gaebler completed the 3 laps in just over 1 hour. They were then followed by Brett Burvill in 2nd and Gavin Davies in 3rd.

The second race of the day was also held in the morning with the 15 knots remaining throughout the race. This time the breeze was more stable and it was Iordanis Paschalidis and Kostas Trignois who took the race victory followed by Roland and Nahid then Paul Peterson and Jared Eyles.

After a lunch break the last race of the day and year was started in 18-20 knots and finished in 22-25 knots. What a fantastic way to end 2014! After plenty of action and capsizes across the fleet Gavin Colby and Pete Dubbelaar took the line honours and headed back to shore for a well deserved rest. 2nd place went to Lachie Gibson and Josh Fugill then 3rd place was taken by Brett Burvill and Ryan Duffield. 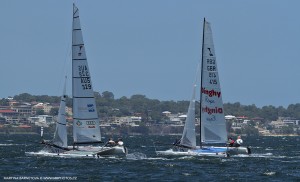 Going into the rest day Gavin Colby and Pete Dubbelaar lead the fleet by 4 points. Brett Burvill and Roland Gaebler are tied on 22 points with Brett holding 2nd place currently on count back.

Tomorrows rest day is very well placed with a New Years Party being held at Nedlands Yacht Club.  Racing continues on Friday with 2 races scheduled for the morning and afternoon.