Saturdays first race saw a mixture of fluky winds with big holes across the race course. This proved tricky for some of the sailors who took the wrong side of the course on the first upwind putting them right at the back of the fleet. Some sailors got stuck and 5 boats were timed out from the 20 min time limit. It was Roland and Nahid Gaebler who led the fleet with their boat which was repaired overnight.

The race officer started another race but the wind died and shifted so the race was abandoned before end of the 1st lap. After a short wait the race officer and his team decided it was best to send the sailors back to shore under a postponement with one more race to sail

After lunch the AP flag was removed much to the sailors amusement as they looked out to a lot of water and no wind. The sea breeze was coming and soon the sailors were flying out to the starting area to sail the last race of the event.

The race provided some great battles throughout the fleet with sailors chasing down places to try and improve their results. It was Gavin Colby who came out on top followed by Roland Gaebler and then Iordanis Paschalidis.

The third place result left Iordanis and Kostas 7 points ahead of Brett Burvill and Ryan Duffield which meant they secured their fourth World Championship in a row.

Back on shore prize giving for Australian Tornado nationals came first with the presentations inside the club house with cheese and nibbles.

The class association and its members have had a great week of racing in Perth. A big thank you to Nedlands Yacht Club, the volunteers and sponsors for running a fantastic event. 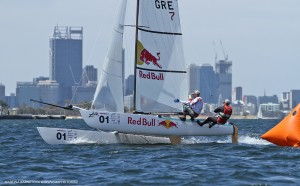 Next year the Tornado Class will head to Carnac in France from the 5th to 12th September for the 2015 World Championships and Global Mixed Championships. 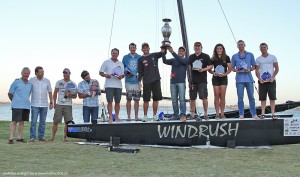 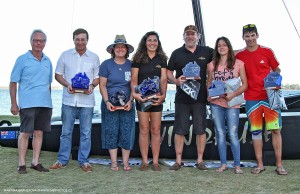