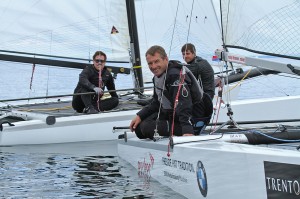 It was Roland and Nahid Gaebler who held the lead going into the last day and they were hoping there would be no racing because the Greek team of Iordanis and Kostas could discard a 5th if there was further racing in the championship.

Soon after there were 32 Tornado’s drifting toward the start boat waiting for the race officers instructions, it didn’t look good with the postponement flag on the front of the committee boat struggling to fly in the light airs.

One hour later the wind had disappeared and two hoots were what the sailors were waiting for after a challenging series of racing. It was time to head home and pack up ready for the road home.

A big thank you to the Yacht Club Rheindelta and everyone involved in organising the Championships, it has been a great few days for the sailors with a good mixture of social and sailing.