The SCFF, Sailing Club Fuessen Forggensee was this years venue for the 2013 German Open & Mixed German Tornado Championship. It’s the 3rd time the Club has organised this event, the first time was in 1985, then 1993 and this last weekend.

32 Crews from 5 nations, 10 races with winds between 12 and 22 knots made the whole event, along with the weather being a fabulous highlight! 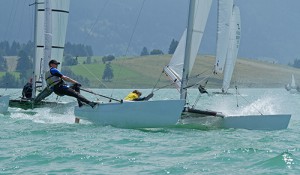 The organisation was a success, on land and water. The opening evening with a reception by the major of Fuessen in the Town Hall and Museum, the second evening took place on a cruise ship on the lake Forggensee at sunset with free beer and great food along with bavarian traditional music. The prizes were shiny and glamourous, no one went home empty handed.

Daily food and drink kept everyone fed and watered, especially the “Bavarian Water” by the Aktienbrauerei Kaufbeuren which went down well after a long day with 3 to 4 races.

Roland and Nahid looked like the clear winners until race 9, then their mast cracked at the base and came down, they could not continue their clear winning streak. Just behind them were Nico Lutz and Veit Hemmeter (the new President of the German Tornado Class) who then took over the lead.

Roland and Nahid Gäbler had to make do with 5th place, in the Open category, and were able to confirm their 1st place for the Mixed Tornado Championship, in front of the Czechs Pavlis Zdenek with Michaela Palisova second and Dieter Maurer and Katrin Oldenburg, from the Lübecker Yacht Club.

The Comeback of the Classic Tornados after 12 yrs was a success, this was won by  Ex- Finn Dinghy world class sailor Gerd Griegel, Segelclub Füssen Forggensee with his daughter Sophia.

Roland described the Championship with these words “a fantastic sailing arena at the foot of the Alps and its Castles, with great winds, friendly ambience and a perfect organisation. The talented Dr. Sibylle Merk was in charge of the racing committee, she took part in the Barcelona Olympics in the Europe class. 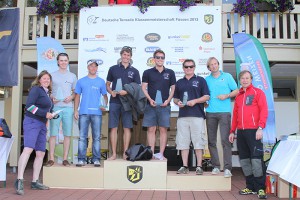